Why I Think Crawl Space Encapsulation is Unnecessary 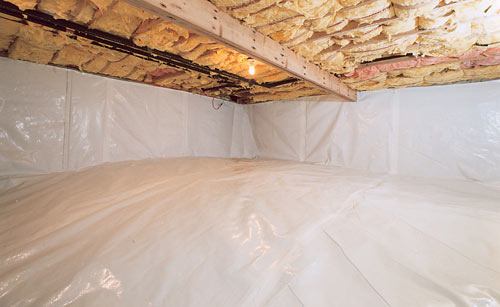 In my work with foundation repair for houses, I run into a lot of marketing hype about crawl space encapsulation.  Encapsulation of a crawl space is done generally by laying down a very thick water proof membrane across the bottom of the crawl space and up the walls.  The crawl space is sealed with this membrane, all the vents are closed.  A dehumidifier is put in the encapsulated space to make it dry.  It makes the area very nice to enter into, it’s clean, dry, and bright (the membrane used is always white).  It’s easy to move around in because you’re not crawling in dirt and trash like you find in many crawl spaces.  What I like about the system is you get a really dry crawl space that is free of mold and other issues.

The problem is it is really expensive.  The other problem, which is not an issue with the system itself, is it often sold to unsuspecting homeowners as a solution to problems totally unrelated to crawl space moisture, or they are not properly installed.  The worse case I’ve seen was when a salesman tried to sell a homeowner a crawl space encapsulation system as a solution to cracks over a large archway – which were caused by a header beam that was too small.  The homeowner would have spent $25,000 to for a “solution” that would not solve the problem.

The other issues I’ve seen is encapsulated crawl spaces put in without attempts to solve the incoming moisture problems in the crawl space.  If a crawl space is flooding, you need to take care of that with drains/sump pumps and so on before encapsulating.

So, other than improper installation, is it worth it to encapsulate your crawl space?  I’m going to run through the logic of it in this article and let’s see where it takes us.  Also, for a contrary view, please watch this excellent video.

First off, we want encapsulation to cut down moisture, water infiltration must be solved separately.  Moisture presents problems in crawl spaces when it condenses on the underside of the floor and insulation.  Once the moisture condenses into water droplets the wood floor can rot, insulation loses its insulating value and begins to fall, mold grows, and a great environment is provided for termites.

What makes the moisture condense?  When the temperature of the air goes below the dew point moisture comes out of the air and will form on solid surfaces.  That’s why in the summer when the temperature goes down at night you will find dew on the grass, your car, and other surfaces.  The same happens in your crawl space.  In the summer, warm moist air will come into your crawl space, and it gets cooled by your floor system (which is cooler because of your air conditioner).  Moisture then condenses on the surface of the underside of your floor.  In the winter, you have cold air come in, and warm moisture migrates through your floor, comes in contact with the cold air, and condenses.

Vapor pressure is the pressure in the air formed by the evaporated water (it can be any evaporated liquid, like gasoline, but we’ll focus on water).  When the vapor pressure is at its maximum, the air is saturated with water, and water can no longer evaporate.  If we circulate air into the crawl space with a lower vapor pressure, we can evaporate the condensation.  What’s important to know is that warm air has a higher vapor pressure than cool air.  So, if we hit maximum vapor pressure on air at let’s say 50° Fahrenheit (10° Celsius), it is at 100% relative humidity.  If we heat that air up to 70° F (21° C), our relative humidity will be much lower.  The air is dryer now, which is why your house is so dry in the winter.

What about summer?  Here we are bringing in warm air that is high humidity, and we cool it down in the crawl space.  Yes, that’s a problem.  You could argue that air movement from the ventilation would keep the vapor pressure down, which will evaporate any condensation.  This is the argument I’ve seen for crawl space fans.  I’ve recommended crawl space fans be put in, and they seemed to work well.  However, to really know you must observe them operating over time.  Also, if we have a wet day where the outside temperature is close to that of the crawl space, you are not getting any advantage from air circulation, since you are circulating saturated air throughout.

So, I think we’ve got some good logic for encapsulation.  The other question I have is, can we go short of crawl space encapsulation?  What if we place a vapor barrier on the ground, and put in a dehumidifier?  In such case, we need the crawl space vents open to comply with Code.    I’ve seen this work well on one job where we had serious warping issues in the floor due to humidity in the crawl space.  However, to make a judgement, we really need to do a controlled experiment of a number of houses.  I think this makes sense because in crawl spaces I’ve entered where water infiltration is controlled, there really isn’t a moisture issue.  So, encapsulation could be overkill.

Now, if we do encapsulate a crawl space, the cost of the membrane installation is very high.  Also, to comply with the latest Code, the following requirements must be met in Georgia:

2.1. Continuously operated mechanical exhaust ventilation at a rate equal to 1 cubic foot per minute (0.47 L/s) for each 50 square feet (4.7m2) of crawlspace floor area, including an air pathway to the common area (such as a duct or transfer grille), and perimeter walls insulated in accordance with Section N1103.2.1 of this code;

2.2. Conditioned air supply sized to deliver at a rate equal to 1 cubic foot per minute (0.47 L/s) for each 50 square feet (4.7 m2) of under-floor area, including a return air pathway to the common area (such as a duct or transfer grille), and perimeter walls insulated in accordance with Section N1102.2 of this code;

2.3. Plenum in existing structures complying with Section M1601.5, if under-floor space is used as a plenum.

I haven’t seen any of this done in the encapsulations I’ve examined.  All of the encapsulated crawl space I’ve looked at were totally sealed, which is a violation of Code in this state and most other states that use the International Residential Code or its variations.  That doesn’t mean the system is bad though, it means you need to assure your contractor is following the Code.

I’ll go one step further.  If you have problems with moisture in your crawl space, you have the water infiltration problem anyway.  Laying plastic on the ground in your crawl space isn’t expensive at all.  A dehumidifier is not prohibitively expensive either.  If that solution doesn’t work, you won’t be spending much more to come back and encapsulate the space.  You are going to be out the minor expense of laying plastic on the ground, and possibly a few hundred for the dehumidifier if the contractor won’t leave it in the encapsulated space (which it can be, there is no “special” encapsulated crawl space dehumidifier).

Therefore, I will almost never recommend encapsulating a crawl space when I make a structural assessment.  It’s an expensive solution that may not be necessary.  Now, if you are a contractor that puts in these systems and you disagree with me, please send a rebuttal to me at georger @runcon.biz.  My opinion is not written in stone, and I am interested in counter arguments.

This entry was posted in Blog, For Home Owners, Forensic/Foundation and Structural Repair Engineering.